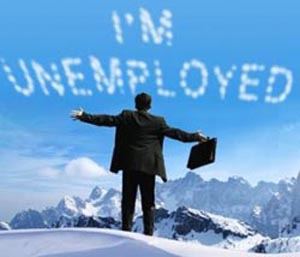 The key to Kalpi’s success, besides a vigorous yearly workout, is unemployment. It gives us the time to pursue our dreams without any of the burdens created by money. However, in most of the world, unemployment is viewed as a negative indicator. That said, few understand how to read unemployment figures and what, if anything, governments can do to prevent it. So let’s look at the numbers (and maybe find me a job).

There are three main types of unemployment. Frictional unemployment is caused by people taking time to transfer from one job to another. For instance, the author of Kalpiblog is frictionally unemployed, giving him time to write Kalpiblog. Cyclical unemployment is caused by busts and booms in the business world. As an example, anyone who worked at Pets.com in the 90s experienced the roller coaster of cyclical unemployment. Finally, structural unemployment occurs when the economy is not producing enough to provide everyone who wants a job with a job at any given salary level or location. Structural unemployment concerns economists the most. Generally, there is a “natural” level of unemployment that the overall rate increases and decreases around as workers move through the cycle of job searching, drinking, job finding, increased drinking and then finally job quitting/firing.

Others advocate for an active government role in fighting unemployment. Government job programs can employ thousands and improve infrastructure at the cost of increasing the government deficit. In addition, lowering interest rates can encourage people to take loans and start businesses thereby creating jobs, but also increasing inflation. This could very well be an explanation for the low level of Israeli unemployment. Though it should be noted that interest rates are not directly controlled by the government, but by central banks.