If you ever want to weep, pay attention to prices when you go grocery shopping. Even products under government price controls like bread, eggs and milk are way above OECD averages. Strangely though, it seems that some neighborhoods (Haredi) and some stores (Cofizz et. al.) are able to charge far less for the same products and stay open.

Does it have to be this way? Why are prices so high? Why are the Haredi markets more sensibly priced? Strap in for some graphic information!

When economists are studying prices, they use a standard collection of goods that are consistently traded within the economy. In Israel, that includes t-shirts that say “American Lover Lady” in glitter and copious amounts of Krembo. Compared to the worlds most advanced countries, Israel is consistently ranked as one of the most expensive. (The variation from 2004-2007 can be explained by a very weak shekel. O how I miss you 4.5 shekels to the dollar). Upon inspecting the basket of goods, we see that items that face competition from abroad tend to be priced lower and vice versa. You’ll also notice that food and housing prices have skyrocketed.

The food market helps to illustrate the problems in the economy as a whole. Locally, there are only a few major supermarket chains and producers to help bring prices down allowing for stores to charge well above the manufacturer’s price. Not surprisingly, the price comes down in poorer neighborhoods where price inflation would price the customers out of the market (if you ever need anything on the cheap, check out a Haredi neighborhood).

Meanwhile, import barriers are high (dairy customs can range between 55 and 212 percent). In addition, The Ministry of Health is notoriously strict with food imports for better or worse, adding to the already high barriers on food imports. Meanwhile, the foods that we consume the most are imported the least (see below). The only positive aspect of the food market is Krembo because every Krembo is a priceless jewel. 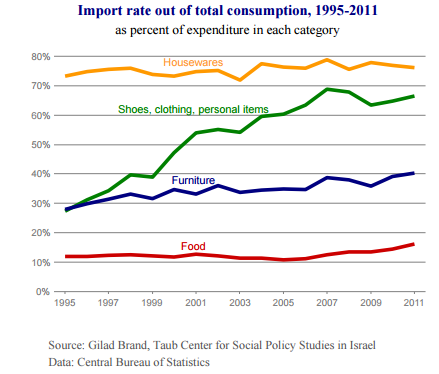 The answer to this problem is simple. More Krembo! I mean competition! That will almost certainly lower prices. Globally, Israel can open up its markets to meats and cheeses from overseas, something which is currently in the works. Locally, more chains are needed in accessible locations and more producers are needed to offer competative pricing. Opening foreign markets will allow for new chains to enter the market on the cheap.

Now here’s the rub, opening markets will hurt existing Israeli companies. It would probably lead to some unemployment along with lower prices. Companies like Tnuva, when threatened with competition, lower prices along with lay offs. How many (hopefully temporary) unemployed laboreres are worth the better prices is up to you.

(Thanks to the Taub Center, which still doesn’t employ me. See the full report here)